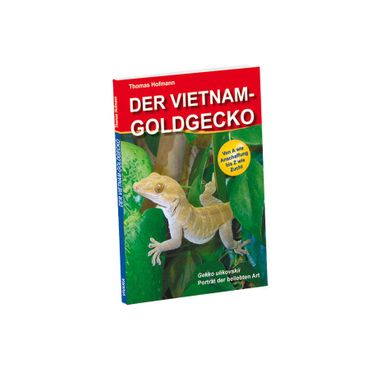 
Geckos are interesting reptiles that already once, head down, run along glass panes. A behaviour that amazes laymen and which also fascinates experts in terrarium animals and their keeping. "On 64 pages with 46 illustrations, "Der Vietnam Goldgecko" now devotes itself to a species which, after its first description in 1994, entered the animal trade on a large scale and is known under various scientific names such as Gekko ulikovskii, but also as Gekko annulatus or Gekko auratus. So, like many trivial names, we have to deal here with a big confusion, which does not always make the communication among the terrarium lovers easy.

Thomas Hofmann, however, is not confused by these discrepancies. Who's surprised? After all, the author of "The Vietnam Goldgecko" is a member of the Phelsuma interest group and is therefore already extensively occupied with the keeping and reproduction of the interesting reptile group. In addition to the Madagascan day gecko, he has a particular passion for the Southeast Asian genus Gekko, from whose ranks he keeps several species and also regularly breeds them. A man from practice for practice, therefore, who also very skilfully designed the monograph from the VIVARIA publishing house. Because here attitude and care of the interesting kind are described equally appealingly as clearly.

Our conclusion: Already the cover picture of "The Vietnam Goldgecko" points out that here it goes from A like acquisition to Z like breeding. A promise that the author has unquestionably kept. Also the photo, showing one of the most striking reptiles, which elegantly shuffles its way through the branches, makes you want to cultivate the interesting species, which was captured in large numbers for export at the beginning of the boom in the early 1990s, in your own terrarium. And just to try the offspring. A concern of terrarium expert Thomas Hofmann, which, in addition to the basics of keeping, is also extensively addressed in "The Vietnam Goldgecko".

About the author of Vietnam Goldgecko:

With Thomas Hofmann we are dealing with an author who is specialized in gecko breeding and who understands the Southeast Asian species of the genus Gekko like no other. A veteran expert in terraristics, who discovered his love for the animals and in particular for the scale crawlers early on. Because Thomas Hofmann, born in 1977 in Zittau, discovered his heart for the keeping of very different animals during his childhood. For 17 years now, exotic reptiles have been part of his great passion, although the author of "The Vietnam Goldgecko" at first seems to be little fixed. Because besides keeping lizards, Hofmann has also lost his heart to turtles and snakes. Nevertheless, as a member of the Phelsuma interest group, he is a true expert on day geckos, whose special attention is paid to the Southeast Asian genus Gekko. A man who has a lot to say about reptiles in general and Vietnam Goldgecko in particular.