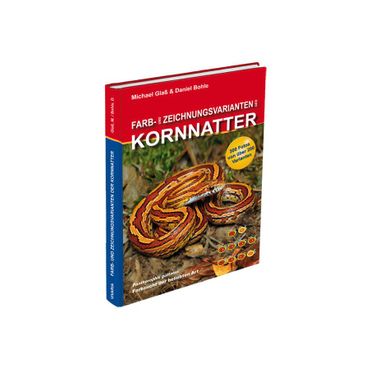 
"In the last decade, the corn snake has advanced to become one of the most sought-after terrarium maintenance specimens of all, especially due to the multitude of its colour and drawing variants," according to "Colour and drawing variants of the corn snake". And indeed, the color spectrum of the corn snakes, whose basic color ranges from grayish to a strong brown orange, is a "treasure" that is even discussed in general online encyclopedias such as Wikipedia. So it is no wonder that the snake, which also proves to be quite undemanding and only medium-sized, is so popular with terrarium keepers.

In "Farb- und Zeichnungungsvarianten der Kornnatter" (colour and drawing variants of the corn snake) it is of course less about the keeping itself (whoever is interested in it, is warmly recommended to read the terrarium reference book "Haltungsgrundlagen der Kornnatter" (keeping basics of the corn snake), also published by VIVARIA Verlag). Rather, the author duo Michael Glaß and Daniel Bohle this time dedicate themselves to the individual color mutations and their breeding. On the basis of modern genetics and Mendel's inheritance rules, the focus is on mutation breeding and its genetic colour and drawing variants. Local variants are discussed as well as the selection and line breeding including the partly complex colour and pattern combinations are described.

Our conclusion: The technical book "Colour and drawing variants of the corn snake" more than lives up to its name. On 160 pages, more than 100 different colour variants of the corn snake are presented here. Even 200 (!) variations of the popular snake are depicted, so that the fans of the "Korni" will certainly not get fed up so quickly. Speaking of pictures: The reference book shines with 300 so far mostly unpublished colour photos. Revised, updated, expanded and almost completely repainted, the new edition is not only aimed at professional grain snake breeders. Because also interested owners and beginners will have their bright joy at the equally comprehensive and understandably written work.

About the authors of "Colour and Drawing Variations of the Corn Snake":

Michael Glaß and Daniel Bohle are a team of authors, which we are also familiar with from "Haltungsgrundlagen der Kornnatter". For the "colour and drawing variants of the corn snake" they now again used the spring together. As with the camera, which both master so perfectly. Both Glaß and Bohle have already worked several times and for various publishing houses as authors, photographers and technical editors. Both are united by their interest in reptiles, nature photography and field herpetology, which they have always shared on excursions.

Michael Glaß was born in 1983 and grew up in Klingenthal in the Vogtland region. He holds a doctorate in computer science and works at the University of Erlangen-Nuremberg. But his love for reptiles has accompanied him for many years of his life. After several years of breeding corn snake color variants, today Glaß has a special preference for the New Caledonian giant gecko, Rhacodactylus leachianus.

Daniel Bohle, born in 1975, is also a graduate mechanical engineer and not a trained biologist. Nevertheless, reptiles and terrariums are his life. Bohle got his first corn snake in 1986 and has been breeding various colour variants since the end of the 1990s. A man from practice for practice, whose advice in "colour and drawing variants of the corn snake" is more than worth reading. But with all his fondness for the "foreigners", Bohle has not forgotten our native reptiles and snakes. His special concern is the protection of the native adders.